Finally time for the final. 13 teams from 17 schools across Glasgow (& 1 team from Fife) gathered at Glasgow Clyde College on the 17th June 2015 to participate in the jam final. After a brief introduction the children moved into the design room – a room we set up so that the children could focus on getting their ideas down on paper before moving to the computer room. The children had been told beforehand what the theme was going to be for the jam – Glasgow City of Science. So that they could do some research and get ideas for their games. This meant that when they got into their teams they could share what they had brought with them and together come up with their game ideas. The children spent around 30 minutes planning their games before we moved into the computing room. 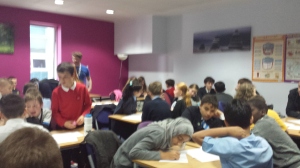 The bonus of being in the college was we had use of a large lab which meant all teams got to be in the same room. It meant they weren’t split across rooms and it was easy for the helpers to then see everyone during the day. The room was buzzing with excited children working hard on their games and discussing their plans. Some teams were heard having discussions about the use of imported images with one of them telling their team members they felt that it was wrong to be using other pictures and that they should be creating their own for their games. This is something I do try and encourage children when using Scratch be creative don’t just simply use the standard images or download pictures – make your own, put your stamp on your game.

After the lunch break the race was on for teams to get their games finished and working. Sometimes this was the frustrating part for teams they’d get one thing working and break something else however persistence pays off for those who keep on trying. In the end the team of judges had to work hard to decide who was going to win. The games were judged on how relevant to the theme they were, complexity and functionality. We still looked at how teams worked as well overall. Both the teams who were runner up and winning had great dynamics within their teams and that showed all day.

The winning team was a team of 3 from Rosshall Academy and Sandwood Primary their game is about Clyde collecting science items (though he has to avoid the Bunsen burners) and can be played here.

The runners up game was created by a team of 4 from Alexandra Parade Primary and Sunnyside Primary. Their game is about a mouse in a lab and you have to navigate the mouse through the lab to get the cheese and can be played here.

Well done to everyone who participated on the day though they all put in a great amount of effort and made it hard to make that final choice.

Most importantly thanks to all the head teachers who have supported me by wanting their schools to take part in the Mini Game Jams. The children were amazing and you should be extremely proud of them all.