During May 2015 306 children from 22 schools across Glasgow participated in a series of Mini Game Jam events. The Mini Game Jam is an event for children who are in P6/7 & S1/2 and it involves schools within the same learning community getting their classes of P6 or 7 together and heading to the local secondary school to work with a class of S1 or S2 there to make a game using Scratch. The children are put into teams with children from the other schools in order to give a transition style event as well. While the main aim of the day is to create a game based on the theme given at the start of the day it’s about a little more than that. It’s about training teachers beforehand to give their classes scratch lessons so they are able to have an idea of how to create a game. It’s about giving the teachers confidence in their own abilities to teach games design/construction to their classes in school. It’s about encouraging children to work in teams and learn from each other. It’s about getting the schools in a learning community to undertake similar Computing work at the same time. It’s about showing children then can be the creators of their own games and not just consumers. It’s about letting children see there are careers available to them in the games industry (I am lucky enough to get volunteers to help and encourage the children on the day who are involved in games either as students/lecturers or who work for a games company). Most importantly it’s about the children having a FUN day while making new friends and being part of a team that’s created a cool game within the space of 3 or 4 hours.

The first event kicked off in the Smithycroft learning community with 118 children from 5 schools taking part. This event was by far the biggest of all jams. Partially down to the fact that it’s been within the LC that I’ve been helping out and undertaking my research, and from their enthusiasm more schools have heard about it. The event was held at Smithycroft Secondary school and the children were put into their teams split over 5 rooms in the school. Once the theme was announced at the start of the day the children moved to their rooms and began planning their games. Which were to be based on Space. Some teams more enthusiastic than others to get started. However after 30 minutes all teams were talking to each other and working on their ideas.

By lunchtime a lot of teams were finalising their games which left them time after lunch to test and refine their game. After lunch all teams quickly got back into putting those finishing touches to their games and worked hard on testing them out before we finally finished for the day. While the games were being judged the children were given a fantastic talk by Chihiro Yamada about how he got into the games industry and what he does now.

4 teams were selected to go through to the final and their games Team Groudon, Exodius, Asteroid Mayhem and JAZ.

Next the Mini Jam headed to Rosshall Academy. The teams were split over 3 rooms though some rooms needed more encouragement than others to get chatting to each other however once they overcame their shyness the ideas started flowing. It’s great watching the ideas being brought to the screen and children realising they can make their games just like they thought. 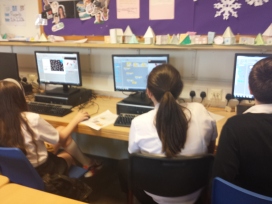 At the end of the day another fab presentation by Chihiro to the children while the games were judged.

The winning games on the day were AAA and Space Run.

The 3rd Jam was held at Holyrood Secondary with 2 classes being utilised for the teams who were participating. It’s the first time I had to give a room of children into trouble for NOT talking. However the children eventually got into it and were soon coming up with some brilliant ideas. 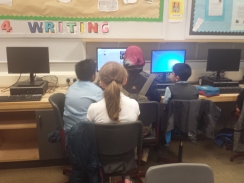 Again by lunch time the children had the best part of their games done and it left them time after lunch to test their games and polish them up. The children were given a talk today by Alex Macolm and Sean Ward both students at Glasgow Caledonian University and they spoke of how they got into games and also of their experiences of the big Game Jam event which they have both participated in.

The winners on the day were Team Pro 1 and Star Walker Voyager.

Jam number 4 was run in conjunction with the Caledonian Club/NoPIlls Project from Glasgow Caledonian University. 50 children from Elmvale primary participated in a day of game making and getting the chance to visit the labs in the University where the NoPills Researchers work. It was a fun day for all involved.

The very last jam was held at Bannerman High School. Every single school in the learning community had sent a team of children along. One of the purposes of the jam is for the children to meet with others within their learning community and this was a great example of all schools embracing that and taking part. Spread over 2 rooms the children once they eventually started talking to each other started to come up with their game ideas and before long they were onto the computers making these ideas a reality. 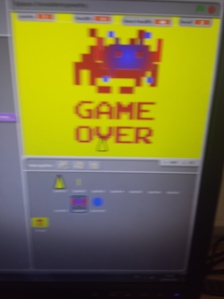 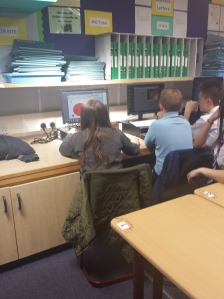 We were left again with some tough decisions however in the end the games that got through to the final were Space Run and Light Bots game about space.

Thanks to all schools who participated in the local events and to Smithycroft Secondary, Rosshall Academy, Holyrood Secondary, Bannerman High School and Glasgow Caledonian University for hosting these events. Big thanks also to those who helped me out on the days of the events: Kate Farrell, Chihiro Yamada, Sean Ward, Alex Malcolm and Stephen McArthur.