While I’m now starting to get back to sorting out what I’m getting up to this year I decided to have a wee look back at all I managed to get to do in 2015 which it turned out was actually quite a lot. I had lots of fun and new experiences and got to work with lots of fabulous folk. So here a roundup of my 2015 (in no particular order):

I passed my level 3 City and Guilds Education and Training Qualification after completing quite a few night classes (CPD which I have greatly benefited from).

I passed my Drivers theory test (albeit 2nd time lucky). I’ve been taking driving lessons for we while now (yes I have failed the test once but fingers crossed for next time) for my poor instructors sake – the guy is a legend well he must be he’s still alive after having me as a student for so long!!!

I became a Microsoft Innovative Educator Expert for 2016.

Spoke at the Raspberry Pi day in Glasgow about my Computing Club in Royston Primary School. I even got a really nice write up about my talk as well. https://www.raspberrypi.org/blog/glasgow-raspberry-pi-day/

I helped facilitate a Minecraft workshop for girls at the Ada Lovelace event organised by the University of the West of Scotland.

I’m running a class in school as part of the Build it Scotland project using Minecraft on the Raspberry Pi to build Scottish landmarks AND I got to be on the BBC website eek! Here’s me and the kids I’m working with talking about it http://www.bbc.co.uk/programmes/p03cddly

I ran my Computing club in Royston Primary for the year – between Jan 2015 and June 2015 I had 3 clubs running and then from Aug 2015 to Dec 2015 I have sadly due to work commitments had to stick to 1 club running. 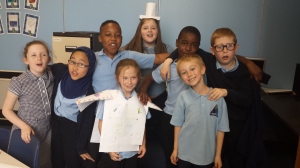 I mentored a team into the final of the Scottish KoduKup as part of my club in school.

I was part of the organising committee for the Computing at School Scotland conference in Dundee (helped out more on the day than beforehand – my timing was awesome arriving at the venue the night before just in time for pizza!!).

St. Brigids Primary in Glasgow invited me along to talk about careers in games for their careers networking event – cool as I got my pic in the local paper and was described by one child as the best person there.

Got to work with a group of pupils from a cluster of Secondary schools on app development as part of a larger project which will be continuing again soon.

I ran some CPD sessions for teachers to teach them about making games with Scratch in order for them to get their children ready to participate in the Mini Game Jams.

I organised 5 Mini Game Jams across Glasgow and co –organised 1 with the Caledonian Club at Glasgow Caledonian University which in total had 305 children participate in making games with Scratch for a day.

I advised on a Mini Game Jam that was held at The Museum of Art and Digital Entertainment in California. 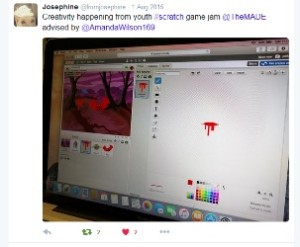 The thesis has now been submitted– yes the force was finally with me and I finished it (did you just hear a whole load of folk go thank goodness for that – well I’m being polite the probably said worse they know who they are and thanks for sticking by me). 2016 will be year of the Viva!!

Oh yeah did I say I do work part time lecturing (a couple of places) and I’m mum to 3 very wonderful and understanding girls who know that all the work I do during the year is for their benefit as well and due to the nature of my jobs I’m super lucky enough to spend the holidays with them and maybe make the occasional Lego model!!

Looking forward to taking on 2016 and hopefully some new projects as well as the ones already in the planning.